Sama, the name of our cottage at Neeleshwar, means equanimity or a feeling of tranquillity, calm, and evenness of mind.

That, and yoga, is exactly why I’ve come here. It is our fourth week in South India. The trip has been fascinating, rewarding, and sometimes death defying as were confronted (and entertained, I admit) by grim traffic on the main roads between beautiful places. Now I need to quieten down my “brain traffic,” my busy brain, and try to compose myself before going home in a couple more weeks.

We missed the train in Cochin because “a political meeting” blocked the only bridge to the station. There were no more seats for us on the next train and all the flights to northern Kerala were booked. Mohan said, “The only way to get there today is to drive.”

“Two-hundred kilometres.” He said. “It could take several hours”

It took ten. We clawed our way up hillsides, cut around sharp lane changes and narrow passes. We dodged construction, obstruction and big trucks spewing diesel. Tuk-tuks, two-wheelers (motorcycles) and scooters had whole families piled on them  – fathers driving, mothers grabbing their billowing burkas and holding onto their children. A few new SUV’s, like ours, added to the confusion, some going backward, some forward, some right-side, others wrong-side, everywhere every-side.

At last we’re here dragging our travel worn bodies through the main entrance of the place we are to stay. I take a long deep breath. The night is dark, the air is warm and fresh. We can smell the sea and the only sound we hear is of the waves. We are led along a winding stone walkway to Sama, one of seventeen cottages on the 10-acre property.

It’s always an edgy experience for me to arrive somewhere I don’t know in the dark of night and I’m even more edgy now after the long drive. I’m anxious to orient myself to this place I’ll call home for the next week. I especially need to know about the yoga. Our first session is at 8am tomorrow and the night will be short. “Don’t worry, you’ll see the pavilion in the morning. It’s over there,” our hostess says, pointing into the blackness.

I can smell spices simmering. I can make out a few candle-lit tables under the palms on the beach. I know we’re beside the Arabian Sea in Northern Kerala. I can only begin to guess what else is out there in the dark and I’ll have to wait for tomorrow morning to find the Yoga.

The specially prepared delicious fish dinner with a glass of Kingfisher

were just what I needed for dinner last night and after a restless sleep re-living our unnerving drive, I wake to a soft tap on the door and a gentle singsong voice. “Good morning Mrs. Mr. Sir. Bed tea.” The sun is beginning to break through giant coconut palms casting beautiful shadows on the beach.  Time for yoga and our meeting with Anil our yoga instructor.

Yoga has gone in and out of popularity throughout history but it’s been around India for thousands of years. There could be no better place to learn about it. In Chennai, the first day, we attended a special performance of Bhartanatyam dance, and learned that the Hindu deity, Shiva, Lord of the Dance, was a promoter of yoga. I could see it in the dance. In the ancient temples of Tamil Nadu we were spellbound by the sculptures and bas-reliefs depicting yoga postures still practiced today.

By our second day in India we had started going to early morning yoga classes everyday, even though Ross had never been to a yoga class before.

Now we are ready for more.

In our meeting, Anil explains that yoga, the asana (postures,) pranayamas (breathing exercises,) and mediation, strengthens the body, relaxes the mind and invigorates the spirit. Apprehensively, I agree with Anil’s recommendation that I should take a course of five private mediation sessions before the group yoga practices at 8am. He says I could learn how to unwind, relieve stress, maybe even lower my blood pressure. “And get rid of the wrinkles on my face,” I hope, secretly, to myself.

Ross and I would have a wake up knock on the door and tea at 6:30am. Ross could have a swim. As a beginner yogi Ross already has as much yoga as he can cope with, without the mediation. Then we will take another private yoga class together before sunset. That’s two hours of yoga for Ross, three hours of yoga for me. Every day.

I buck up my courage and admit to Anil “I can’t concentrate, and try to learn to mediate here with that statue and flowers in front. It’s not me. Besides there’s a beautiful beach right there.”

“Really? You want to meditate on the beach?” Anil says smiling. “The beach will be perfect.”

“Do not open your eyes. Keep them closed until the end of the session.” Anil says. “Relax your arms and place your hands on your knees. Sit with your head, your neck and your spine straight. Relax. Relax. Breathe in the fresh air. Slowly. As slowly as you can.  Breathe out. More slowly.” Anil prompts.

I try my best to sit quietly. I smell the salt and the sea. The only sounds I hear are waves. I am in awe. Each wave is different, a different resonance. I could listen forever. Just listen. There is a calmness and composure around me I haven’t experienced before. My brain is still. I am hungry for more.

Ross is waiting for me. “Weren’t they fabulous?” he says.

“What are you talking about?” I ask, happy, but confused.

“The dolphins. For a long time they were dancing right in front of you.”

I appreciate the words of Henry Miller, the American painter and author. “One’s destination is never a place but a new way of seeing things.”

Marcel Proust the French writer wisely said that travel is not the search for new sights but for a new way of seeing everything, old sights included.

I had missed the dolphins but found a new way of seeing. 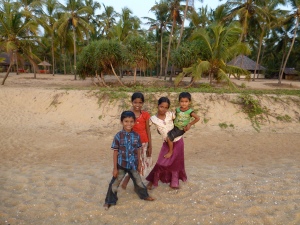 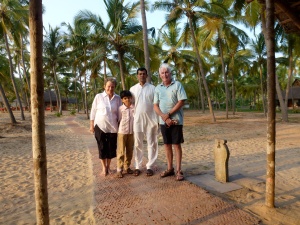 4 comments on “Sama, Equanimity and Yoga”