We climbed out of Tamil Nadu, leaving its magnificent ancient stone temples behind and ascending seventeen hairpin turns. I wasn’t prepared for the haunting beauty of the landscape – the 2695 metre granite summit of Anamudi, South India’s highest peak; impeccably cropped tea plantations interspersed with groves of cardomen, banana, coffee and coconut; abundant wildlife and exotic birds.

We are in Kerela to spend a few days at Windermere Estate Plantation and Retreat at 1600 metres on a hilltop near the former British Hill station at Munnar.

From where I am writing I can see 260 degrees around me, the rest is blocked by an immense granite outcrop, eucalyptus trees, and poinsettia in full bloom. 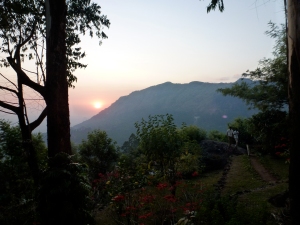 On our way back from Eravikulam National Park yesterday, we saw a wild, mature male elephant grazing on the border of a little farm about a ten-minute drive from where we are staying. 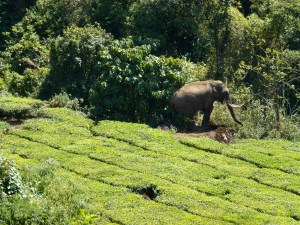 We watched him for a long time from a comfortable perch on a stonewall about a hundred metres away, closer than I’ve been when watching moose or deer at home in the Rockies. The wild tuskers (as the mature male elephants are known around here) are not usually seen. But Ganesha, known to our wildlife guide Moni, is king of the animals and is afraid of nothing, it seems. He weighs over eight tons and eats about 300 kilos of vegetable product a day, including, we noted, lots of bamboo.

How could we not love this awesome place and the great beast whose performance for us was so stately?

7 comments on “Elephants and Tea Plantations”