I love reading about places I visit.  For me, India has a goldmine of fine literature.

It’s no surprise that the country is fertile ground for both writers and readers.

There are thousands of years of history and 1.2 billion people live there. That means there are more than1.2 billion stories to be told and thousands of novelists, poets and other writers available to write them. Even Marco Polo wrote about India. He was so well thought of for his contribution to India that the image of his face is discreetly carved into a sidewall of the majestic Brihadeewarara Temple in Tamil Nadu.

English is the second official language, after Hindi. The towns and countryside are dotted with “English medium” schools and bookstores are filled with a tempting variety of good reading material. There is no shortage of talented, entertaining reporting in English language newspapers.

The Jaipur Literature Festival is held every year in January. In 2006, it’s first year, a hundred people attended. Five years later, in 2011, thirty thousand people went. This year The Hindu newspaper reported, “It looked as though the whole world was there. Except Rushdie, of course.”

Certainly all the other star writers were there. Salman Rushdie cancelled his visit saying death threats to him were the reason. There was rumour that the sales of  “Satanic Verses” skyrocketed after his announcement. Tweet wars were rampant. Oprah Winfrey made an appearance, Michael Ondaatje wowed audiences, and David Remnick, editor of the New Yorker magazine sparked debate when he talked about his book “The Bridge: The Life and Rise of Barrack Obama.”

Tina Brown called it “The Greatest Literary Show On Earth” 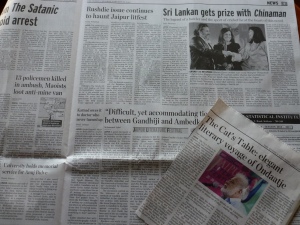 The festival made the headlines for days while I was in India. I could hardly wait every morning to read and devour all the excitement in the Times of India or the Hindu. The stories go on and on for pages. Even now, several weeks later, I read about it on the Internet and watch the conference sessions on video. You may want to check it out too at http://jaipurliteraturefestival.org/ .  Click on “ Watch Videos.”

In the past few years I’ve delved into a small part of the rich body of literature set in India or partly in India, written by Indians living there, written by the diaspora of Asians who live outside the continent, or written by others who have been touched by India in some way.

Here are a few of my favourite reads.

The White Tiger, Aravind Adiga. This dark comedy really spoke to me of the India I know and the issues that come up regularly in conversation and reading – corruption, struggles to make ends meet, relations between India and China, and difficult family matters such as arranging marriages for children. The author grew up in Mangalore and now lives in Mumbai. This is his debut novel and it won the Booker prize in 2008.  The Booker Prize is awarded each year for the best novel written in the English language by a citizen the Commonwealth.

Life of Pi, Yann Martel is about a young boy, from Pondicherry on the Bay of Bengal. I remembered this book when we visited Pondicherry this year just after Cyclone Thane hit and devastated the area. The young lad, Pi, explores spirituality and what life means when he is shipwrecked and stranded on a small boat in the Pacific Ocean with a Bengal Tiger. This fantasy-adventure book won the Man Booker prize in 2002. The author is a Canadian who has travelled extensively and has lived in India.

A Fine Balance, Rohinton Mistry. This Giller prize-winning novel, written by an Indian-born Canadian, is set in Mumbai between 1975 and 1984. The story of a changing society is told through four diverse main characters who bond together during the time of Indira Ghandi, the “Emergency,” and increased government powers and crack down on civil liberties.

Miss New India, Bharati Mukherjee. I read a good review of this book in the Globe and Mail so I downloaded it onto my e-reader while I was travelling. It’s a compelling novel – lots of action, description, and a unique look at the new India. The story is of Anjali, a young woman who leaves her small town to find a high paying job in the high tech industry in Bangalore. The author, who was born in Calcutta, skilfully connects the high tech world of the call centre industry, snazzy coffee shops and bars to the other world of tradition and coping with change.

The English Patient, Michael Ondaatje. I’m putting this on my list because Kip, the Indian Sikh sapper, for me, is one of the memorable characters in Literature. The setting is WWll.  Kip’s comment about the west never being able to reconcile with the east, and America never doing anything like dropping an atom bomb on a white population stuck with me. The book won the Booker award for fiction and Ondaatje was one of the stars at this year’s Jaipur Festival.

The God of Small Things, Arundhati Roy. The author was awarded the Booker prize in 1997 for this, her debut (and only) novel. It is semi-autobiographical, set in Kottayam, Kerala from 1969 to 1993, where Roy grew up. This is one of my favourite places in India, close to the world renowned “backwaters.” The story is about “small things” that affect lives. Themes of the caste system, forbidden love, communism, and Kerala’s Syrian Christian community are superbly woven into the story of fraternal twins who are separated.

Midnight’s Children, Salman Rushdie. This book won the “Booker of Booker” prize  (i.e. the best all time winner) to celebrate the award’s 40th anniversary. It is also on Penguin’s list of “Great Books of the 20th Century.” Using a mix of magic realism and historical events, the story of Saleem Sinai, who was born with magical powers at the exact moment of Independence, is embedded in an account of India’s transition from Colonial times to Independence and Partition.

A Suitable Boy, Vikram Seth. This is the story of four families as a mother searches for a suitable boy to marry her daughter. It is peppered with delightfully solemn and satirical views of national politics. Published in 1993, this book is 1488 pages long so it takes commitment to read. It has won several prizes. It’s worth the time.

Indian Summer: The Secret History of the End of an Empire, Alex vonTunzelmann. This is a history book that reads like a novel. It’s full of romance, intrigue, religion, and disputes surrounding the political end of the British Empire in India. For me it was an important read to help me understand India and today’s politics.

Cutting for Stone, Abraham Verghese. The author was born in Ethiopia while his parents, teachers from Kerala India, lived there. The main characters in this gripping family saga, set in Ethiopia and the United States, are two physicians from India. It is on my list because it helped me understand better the issues facing expatriates and the Indian diaspora from Africa that now lives in North America.

What are some of the books you’ve read about the places you visit (vicariously or otherwise)?  Please click on comment and tell us about them.  I’d love to read your stories.

Update March 20. Eleanor Wachtel’s CBC Writers and Company interview with the Indian writer and politician Sashi Tharoor is brilliant. If you missed it  click  http://www.cbc.ca/writersandcompany/episode/2012/03/18/south-asian-conversations-part-5/